As of the end of July, I will have posted a weekly menu and shopping list to my blog for for one whole year!  Now granted by the time I get to July 31st (one year exactly from my first menu post), I won’t have exactly 52 entries. I skipped a few weeks because we were on vacation.  I feel like I accomplished a lot and based on feedback from all of you it was greatly appreciated.  But nonetheless, I think it is time for a change…

All of my weekly menus are “Strict 30” compliant and that resource will always be there for my nutritional cleansing friends whenever you need a menu.  But ultimately I love cooking and making healthy food.   I really want to do a more personal posts about how I deal with meal prep and menus throughout the week.  It might be hard to believe but rarely do I follow the weekly menu that I post for all of you.  My preference is to cook from my own head, rather then an actual recipe.  At this point in my life I know what flavors go well together and I find I feel a bit of a disconnect when follow a recipe.  Now that doesn’t mean that if I find a beautiful recipe, that I won’t follow it, because I totally will.  Also at this point in my nutritional cleansing journey I am not “Strict 30”  but have moved to the maintenance phase.   To be quite frank, I’m dying to share some other recipes that are a bit more flexible.  I still ALWAYS eat clean and healthy but I love that I now can incorporate organic pork and beef as well as occasionally add a bit of dairy to my recipes.

So from this point on I’m just going to blog about what I’m cooking during the week and in the process document my recipes, include some pictures and maybe even an occasional video.  So I thought I would get started this week by introducing the food prep I do each Sunday.

As far as my breakfast each weekday, I still just enjoy a nutritionally dense, high-protein, meal replacement shake.  It remains my favorite way to start the day.  However Mike requires a bit heartier of a breakfast.  In fact he drinks a shake as a snack, at 60 he still has the metabolism of a 19 year.  It pisses me off, but some people are just lucky that way.

We determined about two years ago that Mike’s blood sugar was spiking and then crashing, requiring him to pull over and take a nap while driving.  No really all that safe and Mike wasn’t really feeling his energetic best self.   Plus during that time his doctor was noticing that his A1-C (sugar in his blood) was creeping up each year and was getting close to being pre-diabetic!  So we nixed the Multigrain Cheerios (too high in carbs) and I’ve been making an egg, meat and potato breakfast for him each week ever since.

This week I decided on a  Bacon, Leek, Mushroom and Sweet Potato Fritatta.  I try to make it as simple as possible, so I can throw the ingredients together into one pan to cook before finishing it in the oven.  But before we get started we need to get each item chopped and prepped to cook.

Leeks are one of my favorite flavors, they are great in a frittata, risotto, dips or even just as a nice topping on chicken.  To prepare leeks you must first cut them in half lengthwise and rinse them as they tend to have a bit of dirt in between each layer.  So once you’ve cut them in half, rinse them under some water to get them nice and clean.  Then cut each half into little slices, so now your slices look like little half moons.

I do the same thing with the sweet potato.  After it’s peeled I cut slice about 1/4” thick slices and then I cut those slice in half as well.  If you don’t have a mandolin, a slicing device that will save you loads of time in the kitchen, I recommend you purchase one.  Click here for a quick like to one on Amazon. I love using any type of potato in a frittata because the potatoes sink to the bottom of the pan while cooking, sort of creating a “crust” on the bottom. Chop the cup of broccoli into small pieces. Last but not least, I cut the bacon into small bits before I cook it as well.  Now that everything is chopped and ready to go it’s time to get to cooking.

First I start by putting the bacon in the pan on medium-high for 2 minutes until it is almost all the way cooked.  It’s going to go back in the pan later and then get cooked again in the oven, so it’s okay if it is a little undercooked at this point.  Remove the bacon from the pan with a slotted spoon and place on a paper-towel lined plate to drain the excess grease.  Remove excess grease from the pan only leaving about 1 TBSP of the bacon grease to cook the other items.  Reheat the pan and throw in the leeks, mushroom, broccoli and potatoes.  Cook for approx. 6 to 8 minutes on medium heat until the potatoes are just starting to get tender and the leeks and mushroom are soft.  Throw the bacon back into the pan and mix it around until all ingredients are combined well.  Place mixture into a grease 9 x 9 square pan. 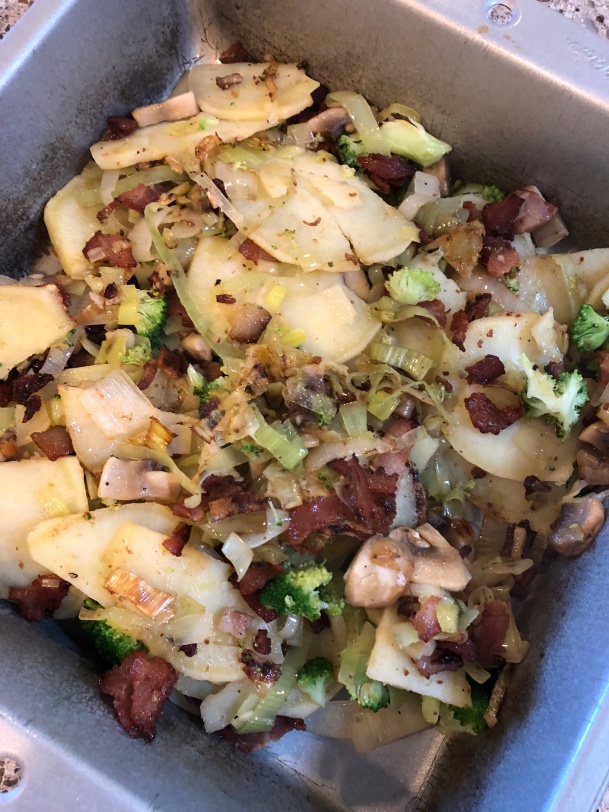 Beat the 6 eggs together in a bowl (add about 2 TBSP of water for extra fluffy eggs).  Add the TBSP of chopped chives to the eggs and mix well.  Pour the egg mixture over the other ingredients in the pan and cook in the oven for 25-28 minutes on 375 degrees. 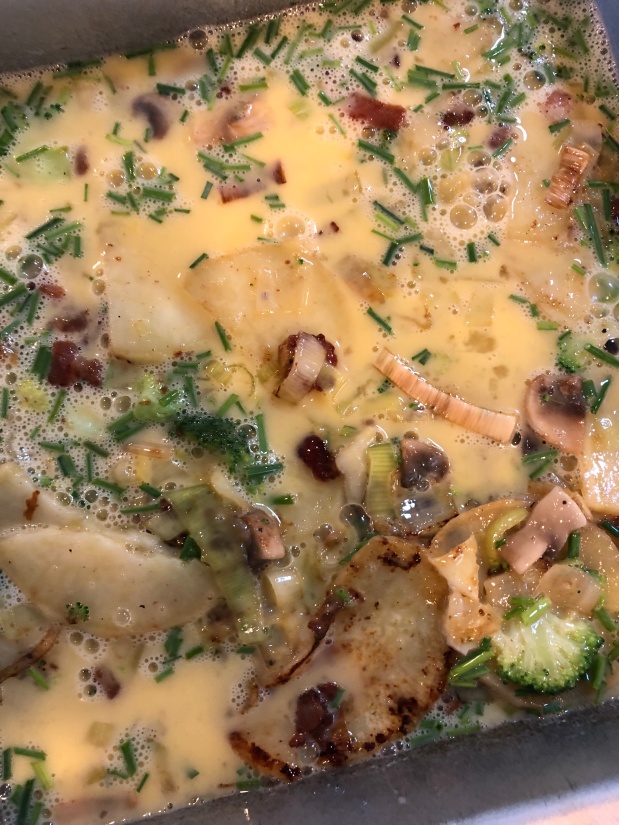 Cut into four servings and refrigerate.  These can easily be taken out of the fridge each morning and reheated in the microwave for a delicious and well balanced meal.  It would have been awesome if I had remembered to take a picture of the finished product but trust me it was beautiful!

My husband likes his with a cup of mixed berries and 1/2 of a avocado.  His breakfast comes to a total of 350-400 calories, so if you want to decrease the calories a bit, try having only a 1/4 of an avocado.

The other two things we always do on Sunday for our meal prep for the week is make mayonnaise and hard boiled eggs.  My husband packs a sandwich for lunch everyday and he can not longer live without my homemade mayo.  The last task on Sunday is to make hard-boiled eggs.  I love my egg cooker!  They are super easy to find on Amazon and make cooking eggs fool-proof, plus there is no wasting a pot of boiling water.   Click here for a quick link.  My husband eats an egg and a protein meal replacement shake as a snack every afternoon and I have a hard boiled egg on my salad at lunch each day.

This whole prep time on Sunday takes between 30 to 45 minutes, but saves us a ton of time on breakfast and lunch during the week!