When I started this blog the idea was to write about my adventures in Food, Fitness and Fun. Sure I’ve done a great job of posting my weekly menus and shopping lists, which is what brings people to this blog, but that’s not the reason I started it and not what I want the entire content of this blog to reflect.  The problem is that between my day job and my nutritional cleansing coaching I’ve found myself not having time to keep up.  But now I think it’s time to get to blogging more about fun, fitness and creating many more original and healthy recipes.  In honor of that commitment I’ll be writing weekly about my weekend adventures.  My husband and I fill up Friday and Saturday with adventures in wine, culinary, travel and try to get outside and get some exercise each weekend.

So let’s have some fun!

A couple of weeks ago I sent a message to my college roommate wishing her a Happy Birthday.  In passing I asked if she was going to be in the area (she lives in Northern California) anytime soon.  I was shocked when she said she’d be in San Diego in a couple of weeks if I wanted to drive down.  It turns out she was staying at the Hotel del Coronado on Coronado Island for a convention for the week and would be free on Friday night before heading home on Saturday.  I couldn’t pass up a chance to reconnect and to spend the night on Coronado Island.  Of course I would have loved to say at the Hotel del Coronado but at $350 a night, it’s a bit out of my price range.  I ended up finding a quaint little boutique hotel right across the street called Villa Capri by the Sea and booked it.

Friday night rolls around and we jump in the car as soon as we get off work at 4:00pm and start the 100 mile drive to the San Diego area.  Of course there are accidents and at some point we are completely stopped on the freeway for about 20 minutes, the joys of living in Southern California. By the time we meet up with my friend, Erica, at the Shearwater Bar in the Hotel del Coronado it’s after 7:00pm.

If you’ve never had the chance to go to the Hotel del Coronado you are missing out. Hotel del Coronado (also known as The Del and Hotel Del) is a historic beachfront hotel in the city of Coronado, California. It’s an absolute gem and a rare example of an American architectural genre: the wooden Victorian beach resort. It is the second largest wooden structure in the United States (after the Tillamook Air Museum in Tillamook, Oregon) and was designated a National Historic Landmark in 1977 and a California Historical Landmark in 1970.

When it opened in 1888, it was the largest resort hotel in the world and the goal was for it to be the talk of the Western US. It has hosted presidents, royalty, and celebrities, in fact when we arrived my husband spoke to Larry David of “Curb Your Enthusiasm” at the bar.  It’s 100% worth a visit as you truly feel like you’ve gone back to a different time when things were simpler but sophistication and class played a much bigger role compared to the laid back casual lifestyle that is more common in beach towns these days. 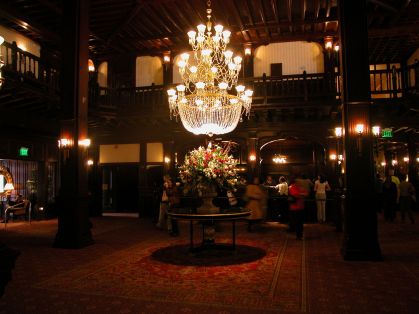 After sometime spent in the hotel bar we decided to hit the streets and find ourselves a nice restaurant where we could get something decent to eat.  We decided on Brigantine which was maybe a 1/4 mile walk from the hotel.   I ended up getting the Swordfish, my husband got the most massive piece of Beef Short Rib I’ve ever seen and Erica decided to try something new and ordered the San Dabs.  The food was great and I love a restaurant that provides a lengthy wines by the glass list, that does not just consist of a Chardonnay and Cabernet Sauvignon.   Once we finished our dinner we moved to the bar and continued to catch up and drink more wine.

The whole drinking wine until midnight might not have been the best idea as Mike and I made plans to go for a 6-mile run in the morning around the island.  I felt fine in the morning but there is a difference between feeling fine and feeling good enough to go for a 6-mile run.  It’s safe to say that run might be in the top 5 of the worst runs of my life.  But I prevailed and a crappy 6-mile run is way better to have accomplished then no run at all.  Mike on the other hand, felt fantastic.  Look at his smiling face as we stopped at the 3-mile point for an energy boast with a little Amped Fuel.  We both laughed at the fact that we rarely have a run together in which we both feel great.

After the run we had just enough time to go back to the hotel and shower and head out to met my nephew, Christian, in Point Loma at Liberty Station for brunch at Breakfast Republic.  The wait for brunch was 85 minutes so we used the time to cruise around Liberty Station.  Liberty Station was formerly the Naval Training Center in San Diego.  My husband was actually stationed there in 1976 for his Navy Boot Camp. Basically they renovated the commissary and the surrounded barracks and it’s now a hot spot for shopping and eating,  It was pretty cool for Mike to walk around the area and remember back to when he was stationed there.  So the 85 minutes flew by and before we knew it we got a text that our table was ready.  I love a restaurant with a sense of humor and Breakfast Republic did not disappoint.   Funny pictures on the walls, coffee cups and napkin rings with a sense of humor all give this breakfast/brunch chain a funny edge.

Even while I was in the restroom in the middle of the song that was playing, it suddenly stops and I hear…

“Boy, that escalated quickly. I mean, that really got out of hand fast!
It jumped up a notch.
It did, didn’t it?
Yeah, I stabbed a man in the heart.
I saw that! Brick killed a guy! Did you throw a trident?
Yeah, there were horses, and a man on fire, and I killed a guy with a trident.
Brick, I’ve been meaning to talk to you about that. You should probably find yourself a safe house or a relative close by. Lay low for a while, because you’re probably wanted for murder.”

Quite literally one of my favorite scenes from the movie Anchorman. Thanks for brightening my day Breakfast Republic.  Plus the brunch was terrific (I love a tasty breakfast!) and so was the coffee.  After breakfast we made a quick stop at the Public Market to pick up some special cheese for Sunday night  and do a little shopping.  Mike found himself a new wood watch and I found a ring and earrings at Double Happiness Jewelry.  I think I’m now completely obsessed with her designs.

We hadn’t intended to leave San Diego so late but by the time we got in the car it was 2:30pm and we had a 1 1/2 drive to get back home, get dressed up and head to another beautiful beach destination.  Our next destination was the Montage in Laguna Beach for dinner at The Loft to celebrate my husband’s brother and his wife’s 50th anniversary!  Their kids could not have picked a better location for this momentous occasion.  Mike and I have always wanted to go there but honestly it’s pretty pricy so this ended up being out first time there.  We got there early so we had time to get a martini in the hotel bar, those two martinis came to a grand total of $46!  See what I mean about a bit pricey?  But you pay for the view and catching the sun setting over the ocean was pretty spectacular. 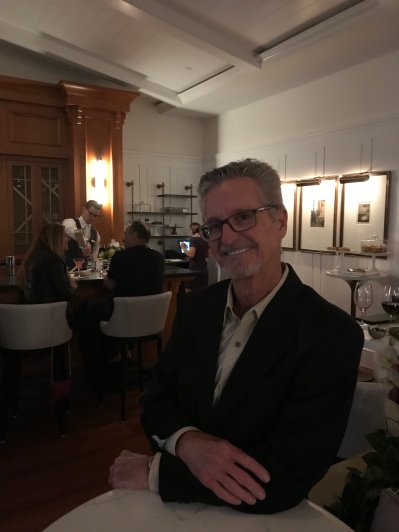 The surprise party went off without a hitch and we celebrated until 11:00 pm with the family.  Two wonderful fun-filled days and now today is Sunday and I have time to relax, get chores done and reflect on a great weekend.  Next weekend’s adventure… Monterey for  a couple of games of Otter Softball at Cal State Monterey Bay!