I haven’t given birth to any children, but I was lucky enough to get two awesome step-daughters when I married my hubby 17 years ago.  Many people over the years have gotten the wrong impression and thought that I disliked children.  This could not be any farther from the truth, I love kids I just never really wanted my own.

Before I was blessed with my step-daughters, the kids in my life where my two nieces and two nephews.  The thing is, I could have been a really young aunt, since my sister and brother are 12 and 10 years older then me.  But no, they had to be a responsible, and grown up and wait FOREVER after they were married to have kids.  By the time my sister had her oldest daughter, Jessica, I was in college in Colorado. Because I was so far away I missed a lot of Jessica’s first years, which I hated.  When I finally moved back to California after college, Jessica had just turned 4 and her little brother Josh was about 7 months.  I lived at my sisters house until I could afford my own place which gave me the most amazing time to bond with these two kids.

We are a close family, we get together frequently, so I get a lot of chances to see all four of the kids.   Over the years my hubby and I began to be known as the “Fant and Funcle”, the fun Aunt and Uncle.  I have always told the kids that I would do anything they asked me as long as it wasn’t illegal or too scary.  One time after watching my youngest niece, Jayme, play softball she requested that I run all four bases in my high heels.  Obviously I had to do it, right?  Most of the time they used their requests wisely (and nicely) and only asked me to play games or go swimming with them.  Sure they drove me crazy at times and playing a board game could on forever because they’d get distracted, but I cherish every minute we have spent together, even if I threatened to disown them on numerous occasions.

Every summer the kids would come to our house and we would do something fun together, whether it was going to the beach to build sandcastles, the Orange County Fair or deep sea fishing. 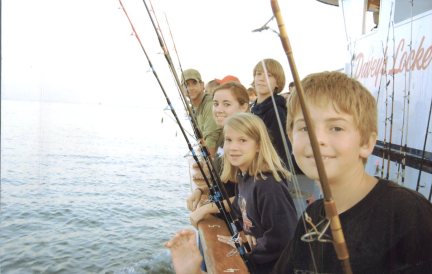 The trips to the fair were inspired in particular by the Friday afternoon deal, which was when all carnival rides were only $1.00.  The rides didn’t last as long as when you pay full price but it was way cheaper and the lines were short.  They would hit every ride they were tall enough or brave enough to go on.  I’d wait outside the ride, holding everyone’s stuff,  while Funcle Mike went with them (remember I’m afraid of everything).  Their favorite ride was that Alien Spaceship, the one that is a enclosed circular room that just spins relentlessly and so fast it pins you to the wall.  For me these are some of the best memories I have, there are very few people that entertain me more then these four kids.  Ever since they were little I’ve been telling them, “One day you’ll grow up and you’ll have better things to do then to hang out with your Aunt Kathy”.  They would always say “No way we are always going to hang out with you”.  And you know what they always have.  They’ve been home for every holiday and family gathering, we’ve played hundreds of hours of games, built many sandcastles, caught a few fish, done tons of crafts, played a lot of jokes on each other and watched a ton of movies over the years.

This year Jessica is off to Kentucky for Optometry School, where she will remain for the next four years.  She will probably be home for occasional holidays and next summer but after that she will be too busy sometimes to make it out to all the gatherings.  So this summer we’ve been trying to shove in as much together time as possible.  So what better to do then go to the fair?

The Orange County Fair starts to late and Jessica will be leaving before then.  So we decided to all go to the Del Mar Fair in San Diego, where Christian lives and try and recapture their youth.  They kids are all adults now, ages 21-26, and clearly there were a few differences this time around.  We spent a great deal of time in the Beer Garden rather then playing carnival games.  But one thing’s for certain, we had to get on the Alien Spaceship ride.  As usual I waited outside while they went in, but this time through some miracle of strength, my husband managed to hold his hand up long enough to film it for a few seconds.  So I finally got a chance to be there with them.

It was a good time and maybe we couldn’t completely catch the fun we had when they were little, but we sure still had a lot of fun trying.  Someday they will become the Fants and Funcles and we’ll continue our legacy and become the “Great Fant and Funcle”.

One thought on “You can’t go back, but you can sure have fun trying.”